So a little while ago I noted that I decided to collate a bunch of my reviews on books about Christology and produce a slim volume that I self published with Lulu. I got the original version in and it was offensive for a number of reasons.

Reason #1 – A plethora of typographical errors. From the first page of the first review to the back cover there were a number of typos that I had managed to overlook. The problem with editing one’s own work is that they know how it should read/look so they read in such a way as to mentally apply corrections that haven’t actually been applied. The typos ranged from punctuation to grammar to spelling. It was awful.

Reason #2 – The format. I had initially began each chapter with the full bibliographic details of each book under review. On my blog this wasn’t really a problem as this was my preferred method in the latter part of my review writing. In a book format it just looked awkward. In addition to this I had formatting issues that were caused by downloading Lulu’s template for a 6×9 book. That brings us to…

Reason #3 – The fonts and spacing. I had created the original file on Lulu’s template in MS Word. My preferred font is Minion Pro for English and the SBL fonts for Hebrew and Greek. I also like my spacing at exactly 1.15 and I prefer for there to be spaces between footnotes. Well, when I uploaded my completed Word document to Lulu’s servers they changed everything to Times New Roman and single spacing! The only fix was to upload a PDF file. The issue there was that when I saved it as a PDF it saved as an 8.5×11 document. Lulu then shrank it down and it created margins that were unacceptable and a font size that was smaller then I wanted.

So in order to fix everything I ended up importing the document into Pages, which is Apple’s proprietary word processing program. I began by getting rid of full bibliographic information at the top of every page. Instead I inserted chapter numbers, the title of the book under review, and the author of said book. This made it look much more like a real book and a lot less sloppy. Here’s the difference: 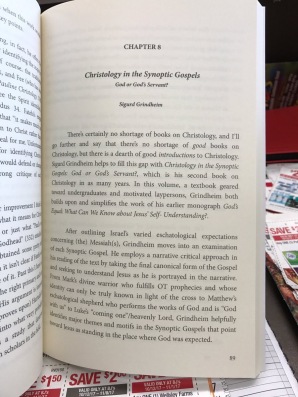 I then combed through the manuscript innumerable times in order to fix the typos. I also caught some mistakes in formatting that I had initially missed. All of my original font choices were restored and I tried my best tp standardize certain things such as section headings and the way I cite page numbers, footnotes, scripture, etc.

Finally, I added some front matter (e.g., copyright page, dedication page) and in the final version a bibliography of the books reviewed. This is where all the information removed from the beginning of each review now appears. So while I’m calling this final version the “First Corrected Edition,” it’s technically the second.

But how did I manage to get everything the way I wanted it when I uploaded to Lulu’s servers?, you ask. Well, Pages exported the PDF document exactly according to the template that the document was created in. So no more 8.5×11. This was 6×9. And the PDF allowed for all of my fonts and spacing. In the end I ended up with something that looks a lot more professional and doesn’t offend my aesthetic sensibilities.

Pick up a copy if you’d like to check it out.

1 thought on “On Aesthetic Sensibilities and Changes to my Book”