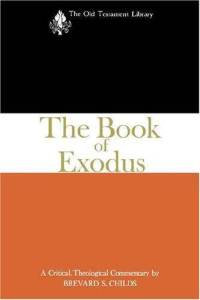 The Book of Exodus: A Critical, Theological Commentary

With thanks to Westminster John Knox for this review copy!

I have exactly two goals for 2012: First, read the Bible from cover to cover, and second, read every book by Brevard Childs that I own. At this point in the year I’m able to attack both goals at the same time. I’m presently in the book of Exodus so I’ve dusted off Brevard Childs’ The Book of Exodus: A Critical, Theological Commentary in order to draw from the deep well of his knowledge. Childs was that rare breed of scholar who was trained in historical criticism and had mastered his craft but wasn’t afraid to treat Scripture as more than an artifact of history, but rather as the Word of God that speaks to the Church today. I’m inclined to think of him as the OT version of Martin Hengel.

His commentary on Exodus is rich and varied, containing something for the critical scholar, the Biblical theologian, and the interested layman alike. The book is laid out according to the following format:

There is some variation and not every section strictly adheres to this format, but for the most part it’s pretty consistent (at least so far as I have read). The textual/philological notes and the literary/form-critical/tradition-historical analyses are geared more towards scholars than non-specialists. Unless one has some familiarity with textual criticism and cognate languages the textual/philological notes will read like gobbledygook and the various analyses will benefit those with training or familiarity with historical criticism (for example, unless one knows a thing or two about the Documentary Hypothesis, these sections could be confusing).

The OT context, NT context, and Theological Reflection are the meat and potatoes of this commentary. This is what pretty much any/every reader can benefit from. The OT context offers the commentary proper and treats the final form of the text. Issues of the text’s pre-form and pre-history have already been addressed in the previous section so Childs operates according to the canonical text as we have it. This section is ended with more detailed notes, which is a common feature in many commentaries.

The NT context (or ‘use’ depending on the passage under review) section shows that Childs is adept at recognizing quotations and literary allusions. But the Theological Reflection is where Childs shows his Biblical theological prowess in connecting the two testaments. This is where this commentary really shines as Childs notes obvious parallels and subtle ones as well. He has a great eye for God’s unfolding plan of salvation and the way that the NT builds upon the OT. He was saying things like “The Messiah identifies himself with the history of his people” (24) long before it was popular, or dare I say, cliché.

I’ve yet to really say anything about the history of exegesis section. In truth, Childs is right to note that this can be “passed over on a first reading” (xvi). This isn’t to say that it’s not helpful—it is—but it’s superfluous. Perhaps the best thing about this particular section is the inclusion of Jewish interpreters alongside Christian ones. The only disappointment is that even in the longer treatments, the comments are still pretty basic and underdeveloped. Take, e.g., the history of interpretation on the Passover (207-12), which spans about 6 pages (to include bibliography); Childs just doesn’t say much. It’s a basic comment and then a pointer on where to go for more information, which is helpful in its own right, but disappointing just the same.

At the end of the day I don’t have much to compare Childs’ commentary to. I have exactly two other proper commentaries on this book (Keil & Delitzsch and Walt Kaiser’s EBC volume) and I haven’t used either much, if at all. I can say that Childs is a Biblical theologian of the first rate. I can say that his theological reflections leave me oohing and aahing and motivate me to keep a closer eye on the text. Can I do without the constant reference to JEDP sources in certain sections of the commentary? Yeah, but he’s a product of his training, even if at times he railed against it. The fact of the matter is that this commentary can reach so many audiences that I can’t see a group I wouldn’t recommend it to. And keep in mind, I’ve only gotten through Exodus 18; we still have all the really good parts to come!

2 thoughts on “The Book of Exodus: A Critical, Theological Commentary”