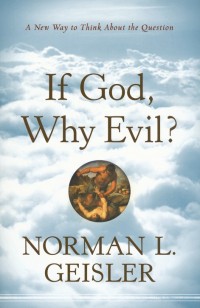 If God, Why Evil?: A New Way to Think About the Question

With thanks to Bethany House for this review copy!

If God, Why Evil? is a succinct theodicy aimed at a general audience of seemingly Christian believers. I say this because it is clear that Geisler bases much of his defense of God against the problem of evil by appealing to the Christian Scriptures. In other words, their authority is presupposed and one would assume that most non-believers would find such an appeal to the Scriptures unconvincing. But not to worry, Geisler also employs quite a bit of Aristotelian logic, which is evident from the many syllogisms that line the pages of this work, and as such, those who value logic over the Scriptures will find plenty of argument to wade through on that front.

The book is divided into ten chapters with three appendices.

In chapter two Geisler argues that God is not responsible for creating evil since evil is not a “thing,” rather it is a “privation” or “corruption” of good.

In chapter three God is said to not be the cause of evil since he gave his creatures free will and evil was caused by free creaturely choice (i.e., Lucifer’s choice to rebel; Adam’s choice to disobey).

In chapter four the argument that God is either not all-good or all-powerful or that God does not exist since evil still exists is found wanting since we have know that God is all-good and all-powerful and we have reason (the Bible) to believe that evil will be defeated eventually.

Chapter six addresses the arguments for the avoidability of evil, which posit better possible worlds in which there is no evil fail in that they either end up eliminating freedom, which would be evil, or they’re not actually achievable even if logically conceivable.

Chapters seven and eight turn to physical evil, which can be attributed to free (human) choices, either directly or indirectly, so God’s existence and power are not challenged, and while God could miraculously intervene to prevent all physical evil, that wouldn’t necessarily make for the best possible world. God knows the ultimate good and he knows what it will take to bring that about.

Chapter nine, the longest in the book (20 pages compared to the 8-12 pages of every other chapter) outlines why hell is necessary according to God’s love, justice, and sovereignty, as well as human dignity. Geisler considers and refutes alternative views of judgment and the afterlife such as annihilationism, universalism, rehabilitationism, and purgationism.

The final chapter addresses the issue of those who have never heard of Christ. In short, God has made himself known through his creation, so those who suppress this knowledge in unrighteousness are justly condemned for not receiving Christ. While this general/natural knowledge of God is enough to condemn, it is not enough to save. Salvation comes through faith in Christ alone. Those who are truly seeking Christ will be met with the gospel in some way, shape, or form.

Three appendices and a bibliography complete this volume. The first appendix discusses animal death before the fall of Adam; here Geisler lays out the various explanations for how this is possible. The second appendix gives the classical arguments for the existence of God. The final appendix is an unsurprisingly negative review of William P. Young’s The Shack. Geisler finds the book to be compromising and doctrinally harmful. If it weren’t a work of fiction I’d more than likely agree with Geisler’s criticisms but I can’t bring myself to get worked up about it.

In the end this is a competent little theodicy that will serve its target audience well. Those more philosophically sophisticated will long for something with a bit more meat on its bones. The book’s subtitle is somewhat amusing to me since Geisler doesn’t really offer a “new way to think about the question,” in fact, he’s made most (if not all) of these points in previous works (see e.g., Baker Encyclopedia of Christian Apologetics, 219-24; Systematic Theology, Volume Three: Sin, Salvation, 152-78). But he has done a nice job of distilling this information in one small and easily digestible volume.

My biggest criticism of this work is Geisler’s insistence that Jesus “suffered great agony and even separation from God” (101, emphasis mine). He cites Hebrews 2:10-18 and 5:7-9 in support of this assertion but those texts say nothing of the sort. Positing separation results in problems for the Trinity comparable to those he notes in The Shack! Another issue I had was the seeming competition of authorities. As I noted above, Geisler appeals to the Scriptures and Aristotelian logic/philosophy. There’s nothing wrong with this in and of itself, but at times he veers off into speaking of God in general terms as an “Uncaused Cause and Unlimited Limiter” (16) and an “Ultimate Moral Lawgiver” (11; 131). The problem is that this doesn’t necessarily entail the God of the Bible; in fact there isn’t one reference to Scripture in the entire second appendix on the arguments for the existence of God! It would have been nice if Geisler had chosen one ultimate authority to appeal to and stuck with it consistently throughout the book.

6 thoughts on “If God, Why Evil?: A New Way to Think About the Question”