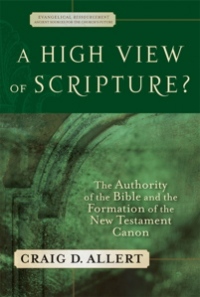 A High View of Scripture?: The Authority of the Bible and the Formation of the New Testament Canon

.
With thanks to Baker Academic for this review copy!

Craig D. Allert is associate professor and chair of religious studies at Trinity Western University in Langley, British Columbia.  A High View of Scripture? (hereafter HVS?) is the third volume in the Evangelical Ressourcement series which is a series that sees the value in patristic thought and seeks to integrate it into twenty-first century ministry.  In HVS? Allert provides the non-specialist with a competent introduction to the formation of the NT canon as well as some food for thought concerning what may or may not be their understanding of the role that Scripture played in the early church.

In the first chapter Allert focuses on (mainly North American) evangelicalism and its view of the Bible through traditional lenses.  Evangelical thought is heavily indebted to its battle against nineteenth century theological liberalism, and as such, tends to focus on the final form of the Bible and not on its formation.  Allert’s book is one that seeks to help the evangelical reader appreciate the process that brought them their Bible, a process that should be taken into account if one genuinely wants to claim a ‘high’ view of Scripture.

The second chapter addresses the basics of the formation of the NT canon laying out three principle theories: (1) The NT was a spontaneous occurrence, (2) The NT was formed in the second century, and (3) The NT was formed in the fourth century.  Theory 1 is extremely problematic and doesn’t accord with what we know from the patristic testimony.  Theories 2 and 3 are taken up later in chapters 4 & 5 respectively.  Allert also does well to define some key terms and lay out the criteria of canonicity (i.e., apostolicity, orthodoxy, and catholicity).

In the third chapter Allert sets the formation of the NT into its proper context, that is, within the community of faith.  Too often, the church’s role in producing, collecting, and defining what would come to be known as the Bible, is overlooked in evangelical bibliology.  To summarize Allert’s main point in this chapter, with a caricature of my own (not one that Allert uses); many evangelicals treat the Bible as if it fell from heaven like premium calfskin manna.  But when one recognizes that the Bible is the church’s book then they’ll be dispelled of such notions and realize the avenue that God took in providing us with his special revelation.

In the fourth chapter Allert shows convincingly that there was no closed NT canon in the second century and that such an understanding of a canon of Scripture wouldn’t surface until the fourth century, and even then we don’t have what evangelicals generally think of as the closed NT canon.  The argument that certain early writers referred to documents that later became part of the NT canon as ‘Scripture’ does nothing for the argument that they were considered canonical at that time.  Nor will it do to argue based on the believed inspiration of a writing since many writings were considered inspired (and others were also called Scripture) that never made it into the NT canon.  In short, Allert is urging against anachronism.

The fifth chapter examines the fourth century lists of Biblical books in Eusebius’ Ecclesiastical History and Athanasius’ 39th Festal Letter.  In Eusebius we find a list divided by accepted writings, disputed writings, and rejected writings.  Certain books that would later be accepted were still disputed in the fourth century (e.g., 2Peter or Jude) and appeared alongside writings that would never make it into the canon, so this shows that the NT canon was still quite fluid, but we do see an authoritative list of books like none that appeared before it.  Athanasius’ Festal Letter on the other hand lists all 27 books that appear in our NT and labels them as canonical.  The same list pops up in Carthage just thirty years later, but neither list settled the issue once and for all as can be seen by the disputed status of Hebrews and Revelation on other lists of fourth century writers.

The final chapter turns to the issues of inspiration and inerrancy.  Allert rightly notes that at best we can only affirm that Scripture is inspired but past that we don’t know much at all.  Even here we have to be careful not to assume that the standard proof-texts for inspiration have ‘the Bible’ in view or any kind of closed canon because, of course, such things did not exist yet.  Inerrancy becomes relative because in the mind of many evangelicals it’s the logical conclusion of inspiration, that is, if the Bible is the product of God, and God cannot err, then the Bible cannot err.  But this calls into question exactly what we mean by terms like truth and error and has to account for matters of interpretative methodology, and when it’s all said and done, if we can’t say much about inspiration then we can’t say much about inerrancy.  As noted earlier, just because a document was thought to be inspired or was considered Scripture didn’t make it canonical nor would many evangelicals think these writings inerrant.

Craig Allert has given us in HVS? a book that’s both attentive and sensitive to history.  He eschews anachronism at every turn and offers a number of correctives for modern evangelicals who read their current beliefs into the church fathers, and for this, he is to be commended.  One of the most profound insights of this book is that early Christians didn’t place the authority of books that would later be canonized in their alleged canonical status or even their inspiration, but rather in their preservation of the teachings of Jesus and the apostolic testimony.  This is a major point that many modern evangelicals would do well to remember.  This work could benefit from a bit more qualification when talking about evangelicals.  For example, Allert regularly refers to evangelicals generally, when it would be better to say ‘many’ or ‘some,’ or qualify the statements with something like, ‘the evangelical authors I’ve read…’ or ‘the evangelicals I’ve spoken to…’

The final chapter also seems a bit disjointed.  The latter half of it recounts the expulsion of Robert Gundry from the Evangelical Theological Society in 1983 over his commentary on Matthew.  The majority of the ETS felt that he was denying inerrancy based upon their preconceptions about what inerrancy was when in reality Gundry was faithful to the doctrine as defined by the Chicago Statement on Biblical Inerrancy in that he interpreted the text not based on what he thought it should mean, but rather based on what Matthew intended it to mean by employing midrash.  While the recounting of these events was fascinating in its own right it lacked cohesion with the first half of the chapter on inspiration and didn’t fit the overall flow of the book.  These criticisms aside, HVS? is a challenging book that will force readers to think about their views on tradition and Scripture, and hopefully cause them to appreciate the former as much as they might appreciate the latter.

16 thoughts on “A High View of Scripture?: The Authority of the Bible and the Formation of the New Testament Canon”