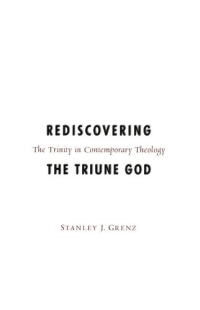 Rediscovering the Triune God: The Trinity in Contemporary Theology

With thanks to James Pfeiffer at Fortress Press for this review copy!

Published a year before his untimely death in 2005, Rediscovering the Triune God was one of Stanley Grenz’s final achievements, and touted as one of his finest.  The book’s premise is simple: examine the resurgence of Trinitarian theology over the last thirty-plus years in the work of various contemporary theologians.

Heavyweights from the three main traditions of Christianity are examined in brief.  There’s a pretty even distribution of Roman Catholic and Protestant theologians focused upon in this volume, but sadly Eastern Orthodoxy is severely under-represented.  From the Roman Catholic tradition we have Karl Rahner, Leonardo Boff, Catherine Mowry LaCugna, Hans Urs von Balthasar, and Elizabeth Johnson.  Eastern Orthodoxy is represented by John Zizoulas alone.  And finally, the Protestants Grenz takes a look at are Karl Barth, Jürgen Moltmann, Wolfhart Pannenberg (his Doktorvater), Robert Jenson, and Thomas F. Torrance.

I hate to admit it, but I have to be honest in saying that I was bored to tears by this book.  It’s not that it wasn’t informative–I can assure you, it was.  It’s not that Grenz was off in his portrayals of the various theologians–in point of fact, his summaries agree largely with what I have read from the primary sources and secondary literature on these theologians.  In the end, I was bored because Grenz failed to capture me with his writing style.  And I understand that his main purpose was to survey contemporary theologians, but his lackluster summary of the development of the doctrine of the Trinity in the introductory chapter left me with a stale taste in my mouth.

William J. La Due published his The Trinity Guide to the Trinity (Harrisburg: TPI, 2003) a year prior to Grenz’s work, and the format was similar.  Examine and summarize the theology of various Trinitarian theologians.  La Due’s work was shorter in each examination while being wider in scope, but the major difference was that La Due’s project made for good reading; it was both informative and interesting.  Likewise, Robert Letham published his magisterial The Holy Trinity: In Scripture, History, Theology, and Worship (Phillipsburg: P&R, 2004) in the same year and devoted more than 100 pages to examining just about all of the same theologians that Grenz tackles (and more), but to my mind, Letham was much more insightful and his criticisms were sharper.

Reading this book felt like a chore, something that I just wanted to get through and get done as soon as possible, but something that dragged on in the process.  Where as everything I’ve read from other writers about Barth’s trinitarianism has made me want to read Barth for myself, Grenz’s presentation leads me to believe that Barth is a tiresome read.  Seeing as how this is the first time I’ve encountered this, I have to chalk it up to Grenz’s writing about Barth, and not the writing of Barth himself.  And there’s also the huge problem of end notes–in an academic work such as this, they don’t belong!  End notes are almost inexcusable in any work, but especially in something such as this where primary sources are quoted so frequently (most of the chapters contain well over 200 end notes apiece!).

If this were the only book of its kind then I’d recommend it wholeheartedly because the information is good, even if cumbersome.  But this is not the only book of its kind, and because of this fact I cannot recommend it.  For introductory reading look to La Due, and for intermediate reading look to Letham.  I found their treatments of the same authors to be much more enjoyable.  In my heart I want to give this book a 3 star rating because the information is accurate, and I believe that people who are interested in social trinitarianism will learn something, but because of the slow pace, use of end notes, and lack of bibliography (another pet peeve of mine with regard to academic works), it is with great regret that I have to give this book 2 out of 5 stars.

I had very high hopes for this volume and in the end they weren’t met.

12 thoughts on “Rediscovering the Triune God: The Trinity in Contemporary Theology”