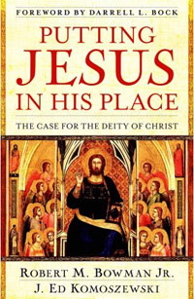 Putting Jesus in His Place: The Case for the Deity of Christ

In this first section of the book (ch. 1-5) the authors set out to show that Jesus shares the honors due to God.  In doing so they build upon the foundation of some Christological heavy hitters such as Larry Huratdo, Martin Hengel, and Richard Bauckham.  First on the agenda is showing the amazingly early devotion to Jesus by Christians in the first century.

It was in this context of exclusive religious devotion to one God, the Lord, that the early Jewish followers of Jesus were expressing the same sort of devotion to Jesus. They worshiped him, sang hymns to him, prayed to him, and revered him in a way that believers in Judaism insisted was reserved for the Lord God alone. To make matters worse, the Christians agreed that such honors were rightly given only to God—and then proceeded to give them to Jesus anyway! [p. 30]

This paragraph explains the thrust of the entire section.  The authors go on to demonstrate each of the points mentioned above.  For example in chapter 2 entitled “The Worship of the Carpenter” they treat the subject of worshiping Jesus very fairly saying:

No accusations can be made of stacking the deck in their favor or reading Jesus’ deity into every passage that they come across with statements like this.  The authors rightly recognize that there are times when individuals (and here specifically Jesus) can be bowed before and revered yet not worshiped.  But not to worry, they don’t conclude their examination with only those passages in which Jesus is not worshiped, in fact immediately afterward they ask the question:

Should we conclude, then, that Matthew’s reports of various persons bowing before Jesus imply nothing more than that he was a respected teacher? [p. 38]

And answer it by saying:

Actually, no. Such a conclusion misses the “big picture” of the larger context of the Gospel as a whole. [p. 38]

They go on to argue (very persuasively in my mind) that:

The chapter continues to build the case for Jesus being worshiped by the disciples, angels, and finally everyone (see Phil. 2:10-11; Rev. 5:13-14).

In building the case for prayer to Jesus in chapter 3 entitled, “What a Friend We Have in Jesus” they take a straightforward approach and simply point out those places in the NT where prayer is directly offered to Jesus.  They argue that “Lord” in Acts 1:24-25 is in reference to Jesus as opposed to the Father and build a solid case for this interpretation based on three things:

First, like the other New Testament writers, Luke most frequently used “Lord” (kurios) to refer to Jesus.2 Second, Peter had just referred to “the Lord Jesus” (Acts 1:21) prior to the group’s addressing the “Lord” in prayer. Third, Jesus personally chose the men who served as his apostles, including Paul and any others chosen after Jesus’ resurrection. The verb Luke uses in Acts 1:24 for “have chosen” (exelexō) is the same verb that appears in another form earlier in the chapter in reference to Jesus having “chosen” his apostles (exelexato, 1:2). [p. 48]

In chapter 4 “Sing to the Lord” they build upon a foundation laid in the Hebrew Scriptures of people singing to Yahweh and show how the earliest believers sang to Christ in the same manner.  Using Ephesians 5:18-20 as a starting off point we are told:

Paul not only tells Christians to sing songs to the Lord Jesus, but he also urges them to sing to the Lord in their “hearts.” In other words, song and music in honor of Jesus are to be such a part of our lives that we find ourselves humming such hymns to ourselves or hearing them in our minds as we go about our daily routines.

A very useful discussion on the Carmen Christi (Phil. 2:5-11) follows as well as some references to the earliest Christian hymn book — the Psalms.

In the last chapter of the section, “The Ultimate Reverence Package” the authors make a very compelling argument for Jesus being more than a mere “spokesman for God” who is the “primary object of faith” [p. 62].  They point to the manner in which Jesus directed the disciples to place their faith in HIM, focusing their attention on Jesus in the same way that Jews were expected to focus theirs on Yahweh.  They cover a few topics from the fear of the Lord to service to Christ in this chaper, but the discussion on the Lord’s Supper is in my opinion the high point of the chapter.  I’ll leave it to the curious reader to purchase the book and find out why I feel this way.

1 thought on “Putting Jesus in His Place (Honors)”